Looking for a job in the next mining boom?

Anyone with the presence of mind to see Australia’s last big mining boom coming stood to make a fortune. Back in 2000, the energy, minerals and metals produced in Australia were worth $45 billion. By 2012, that number was four times higher. The possibilities seemed endless.

But what about now: Is it still worth trying to build a career as a miner, or did we just witness Australia’s last great mining boom? The short answer is: it depends on who you ask. 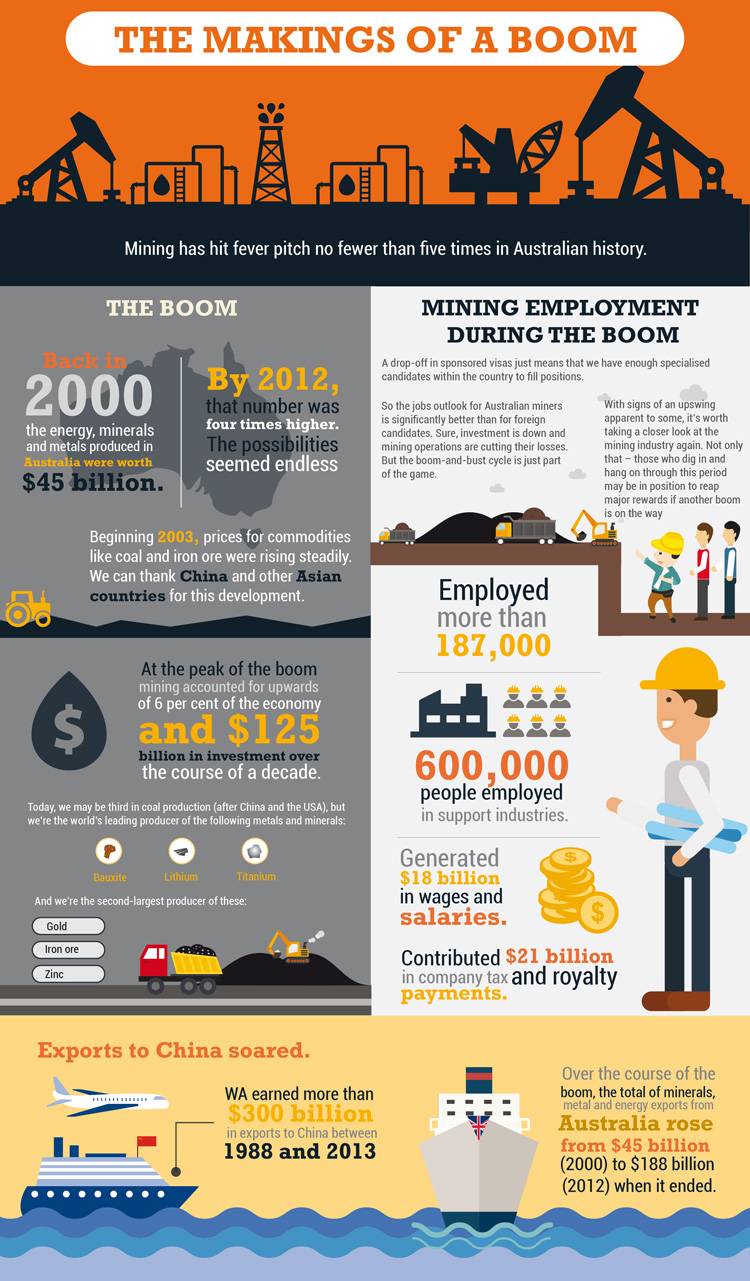 Mining in Australia: The Makings of a ‘Boom’

Mining has hit fever pitch no fewer than five times in Australian history, and the Reserve Bank did a survey of all of them back in 2010. The Australian reported on their findings and named the most recent boom the ‘mother of them all’. Economists were giddy, and investors were locked and loaded.

Calling it the ‘mother of all mining booms’ wasn’t that far-fetched, either. Beginning in 2003, prices for commodities like coal and iron ore were rising steadily. We can thank China and other Asian countries for this development.

No one was ready for the surge in demand. And when it hit, the price for iron ore and coal skyrocketed.

Out of the five mining booms in Australian history, only one could compare to the current one. That was Australia’s first – the gold rush of the 1850s. In other words, the boom we just went through is one of the biggest economic developments in the history of this country.

What Did Mining Do for the Australian Economy?

Australia’s mineral resources have become a major driver for the economy. At the peak of this boom, mining accounted for upwards of 6 per cent of the economy. It also attracted more than $125 billion in investment over the course of a decade. For a thorough breakdown of the economic stats, have a look at this infographic.

We’ll also list a few of the most important figures below:

Suffice to say, mining was a powerful force in the Australian economy. It had a particularly strong effect on WA, where the exports to China soared. In fact, one study found that WA earned more than $300 billion in exports to China between 1988 and 2013. A major portion of that came from mining.

These days, Australia remains a global mining powerhouse. Iron ore and coal were the rock stars of the boom, and they generated all kinds of money that could be funnelled into other mining industries. Today, we may be third in coal production (after China and the USA), but we’re the world’s leading producer of the following metals and minerals:

And we’re the second-largest producer of these:

Australia’s mining industry is now well-developed. The infrastructure is there, and if Australia had played its cards right, we could have lived off the benefits of this boom for years to come. But at this point, most experts are saying we played it wrong.

Mining in Australia: When a Boom Goes Bust

Over the course of the boom, the total of minerals, metal and energy exports from Australia rose from $45 billion (2000) to $188 billion (2012) when it ended. Since then, China’s economy has levelled off, and its appetite for coal isn’t what it used to be. As a result, coal prices plummeted whilst the price of iron ore dropped by half.

As mentioned above, coal and iron were the rock stars of the mineral world. Demand simply isn’t what it used to be. And to hear some talk, Australia squandered any chances we had of really capitalising on the mining boom.

Economists are now saying that Australia should have taxed the mining boom and spent that money on R&D and education. This would’ve served to develop and promote other industries (like agriculture), securing Australia’s place on the world’s economic stage.

As the industry continues to shrink, all but the largest mining companies (BHP, Rio Tinto and Fluor) are cutting staff and bracing for impact. At the same time, sponsored visas across the industry fell by more than 40 per cent last September.

Is There Life After Bust? Experts Say it’s Possible!

It’s not all doom and gloom. For starters, the drop-off in sponsored visas just means that we have enough specialised candidates within the country to fill positions. So the jobs outlook for Australian miners is significantly better than for foreign candidates. Beyond that, there are more than a few experts saying we’re primed and ready for a comeback.

Sure, investment is down and mining operations are cutting their losses. But the boom-and-bust cycle is just part of the game. Some economists and columnists are already hinting at a rebound.

With signs of an upswing apparent to some, it’s worth taking a closer look at the mining industry again. Not only that – those who dig in and hang on through this period may be in position to reap major rewards if another boom is on the way.

Australian Mining: Where the Jobs Are Now

Regardless of whether or not we’re about to see another boom, there’s no question that mining positions are still available to job seekers. In fact, you’ll find open positions in every state.

For anyone looking to get in on Australia’s next great mining boom, now is the time to join the workforce and start building seniority. But what about you? SHARE this article if you think Australia will have another mining boom in the near future.